In light of the recent release of Wanderlust on to DVD, Chelsey scored an interview with one of the movie's stars, Malin Akerman. 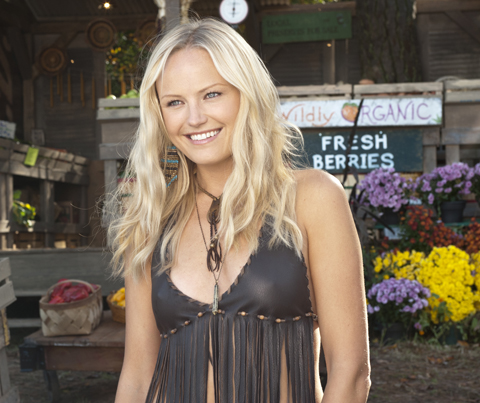 Can you talk about your character? Tell us how you see her.

I think Eva is pretty simple. She’s just this girl who is free-loving in every sense of the word, she gives out her love freely and is just a hippie at heart who adores living on a commune. 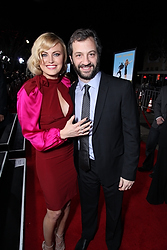 Justin Theroux has said he researched cult figures to understand living on a commune, how did you find your character?

Well, honestly, my character is not as in-depth as Seth was for Justin. I took a yoga class [laughs]. I really felt like she is just a fun, light accent to this film where she gets to have some fun with Paul Rudd’s character, teasing him a little bit. So that’s just teasing boys… and you grow up doing that. Right, ladies? [laughs]

There are some very funny moments in the movie. Working with Paul Rudd, those moments when he is trying to seduce you, they must have been hilarious. What were they like? Was there a lot of improvising going on?

There was tons of improvising, and I could not keep a straight face. Literally, there’s that scene where we’re sitting on the bed and he’s trying to talk dirty to me, and in reality I am not keeping a straight face. I’m not even looking at him at those moments -- he somehow got through it with me sitting there with tears of laughter rolling down my face. It was fantastic. He’s incredible. And a lot of it was just him running on, he just kept going. I don’t know where it came from.

I love it. Love it! But you know, sometimes you improvise and it’s really stupid and you hear yourself saying things and you’re like, “This is so not funny!” and you just hear crickets. But you gotta try it. So it’s a lot of fun. Some of it works and some of it doesn’t. 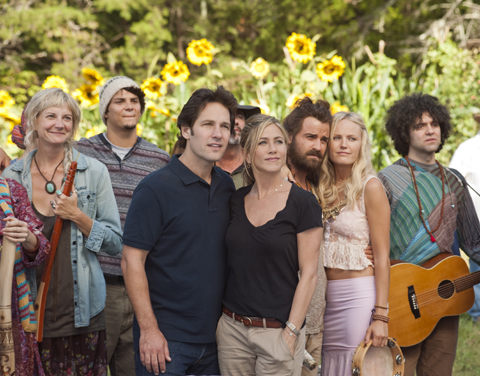 On this movie you were working with Alan Alda who plays the commune’s founder, what can you say about working with him?

He was the most game out of all of us to do anything. He was the funniest man I’ve ever met in my life. What can’t you say about Alan that’s not positive and amazing? He’s one of the greats. Talk about humble -- and after all these years, he still loves acting.

I have read somewhere that you have dyslexia so is it true that you don’t read much?

Yeah, it’s not my favourite. Books, especially, with all the letters… I’ve learned now though: you take a ruler, you take a piece of paper or something and cover the page, apart from the lineyou are reading, then it’s easier for me to see. But if I see a whole page, it becomes a pattern instead of rows. It’s really strange. It just gets a little fumbled. So it makes me nervous more than relaxed. A lot of people relax when they read -- I get nervous. Scripts are a little easier for me.

Do you have somebody to help you get to grips with the script?

I do sometimes, if I have someone around that can help. My husband is not the best one to ask because his accent is super heavy, like: [imitates a heavy Italian accent] “Dis eez…” Thenit’s, “Okay Babe, thank you so much, but I’ll do it.”

Do you speak Italian?

I do, yeah. My husband does not speak Swedish though, but he does speak English.

How is it to be half-Swedish in this industry? Does it give you any advantage?

I don’t know. I think maybe sometimes people find it a bit exotic and fun. I didn’t grow up in Sweden, I grew up in Canada, so I kind of feel like it’s a lie. But I can play that card sometimes where I’m like, “I don’t know, we do that in Sweden…” and I don’t even know if we do, but hopefully they’ll believe it. But it is fun. It is fun to have that sort of exotic edge.

Sweden is a more liberal country, right? So what do you think about Americans being more prudish when it comes to nudity? And there is a full frontal in this movie, so what were those scenes like to film with all the people running around naked?

We were all kind of thinking, “Where do I look? What do I do?” But I have no problem with nudity, obviously. I’ve had my share of films where I don’t have a lot of clothing on. I grew up with parents who were not shy. It’s like it’s a natural part of life and you’re not supposed to be ashamed of your body, it’s just your body and it’s not presented in a sexual way necessarily. I feel as long as it’s not gratuitous, and it’s for a laugh or for a reason, I say, “Why not?” We needto work on Justin Theroux though!

Really? We heard that all the cast went skinny-dipping quite happily.

We all had bottoms on. That was one of the first nights. It was a good way to get to know people, “let’s go skinny-dipping!”

What are your thoughts about free love now that you have had the chance to play withthat idea on film?

I ain’t sharing my husband! I have nothing against people who want to, but I’m not into it. Isn’t it enough to just have one relationship? That’s enough work, I think, keeping one person happy and satisfied. Guys, can you imagine having five girlfriends? That’s a lot of work.

What moments in your life did you feel more like a hippie? Do you have any episodes orstories?

I was a hippie in high school -- I did the Birkenstocks and the long skirts and no make-up. My mum yelled at me, because she is not a hippie by any means and always told me to put make-up on and wear a bra. I put make-up on, but I still don’t wear a bra. So I’m still kind of a hippie at heart.

It would be nice to give up the rat race and get away from it all, but you live in the big city,you have your career and you’re kind of bound to Hollywood, which must be crazy! So how do you indulge your ‘wanderlust’?

Without being cheesy, I think it’s nice to try to find a little ‘Wanderlust’ every day in your life.We’re constantly searching for it. Of course it’s nice to go on a real vacation where your phones don’t work. My special place is my husband’s family house in Italy; they’re from Naples and theycook and they take care of you and there’s a lot of love, it’s amazing. But you know, if you’reable to find just that little bit every day, you feel like you can balance everything out here with all the craziness that’s going on. But I also feel like I don’t want to miss anything. I’m having sucha fun time too, I don’t want to miss it all. I’m enjoying the craziness for now. Maybe one day I won’t so much. Maybe one day I’ll want to sit in a cottage somewhere and just drink wine.

The movie is all about who you really are and who you want people to think you are, right? And as an actress you have a public character, which is maybe a persona you put out. Do youhave your true self, and what are those moments when you are being your true self?

I think that everyone has moments, no matter what you’re doing, whether you’re an actoror a reporter, you will speak differently to me than you will with your boyfriend or your family,you know what I mean? I just feel that all those are just facets of you. It’s still you. There are certain times where you do have to filter what you say because recorders are on and I can’tsay everything because it could be taken the wrong way or out of context, so there are thingsyou have to think about. Of course, I feel the most at home, and the most like myself, when I’m around family and close friends. But at the same time, I always try to bring myself to anything,to here, to you, but obviously I don’t want certain things to be out in public. Everyone has their privacy and a private life as well that we like to keep that way.

You have a lot of movies coming out in the next year, five or something. Have you everbeen more busy than you are right now?

Probably not. Some of them have not been made yet, but yeah, there are a few.

Do you have an idea of why you are so busy?

I don’t know. Let me tell you, a lot of them are independent films, which is really a lot of fun. You actually get a chance to do more films in a year and get to explore different genres andcharacters. I guess I’ve just been saying yes to more stuff. There have been some really greatscripts that I’ve been excited about and I wanted to go on that journey. Last year was a little crazy -- I think I want to maybe slow down a little bit this year, enjoy time with my husband.

Not really. If you just focus on what it is that you want, and have a goal, then you just need to roll with the punches. You’ve just got to figure it out along the way. But I’m having so much fun. What I love about what we do is that it’s sort of cathartic and you learn so much about yourself, sometimes things that you don’t want to learn about yourself -- it is a real journey.

It’s like putting yourself through therapy and you go, “Oh my God!” But I love that part of it and you kind of get addicted to it and you crave it when you’re not working. Again, it’s finding that balance of taking some time for youself. We’ll see; whatever happens, happens. If at some point I’m not enjoying any of it and it gets too much, then I’ll find something else.

What kind of therapy was this movie for you then?

This was laugh therapy. This was guttural laughter. This was actually a workout. It was an abdomen workout.

You are also about to star in Rock of Ages (2012) with Tom Cruise. What kind of therapywas Rock of Ages for you?

Song therapy. That was another film that was a lot of fun… All the comedies are so much fun and then you sprinkle it with a bit of dark, explorative indecent stuff.

It’s loosely based on the Broadway show, and if you get the chance, you should see the Broadway show. It’s great. And I play one of you, a journalist for Rolling Stone magazine who has to interview Stacey Jaxx, played by Tom Cruise.

In your wildest dream who would be the director that you would love to work with?

The Cohen brothers. I really want to work with them. I love everything they do. 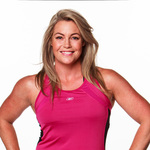 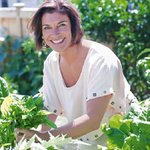