By Emma Sloley for The Style Glossy

For most women, the idea of being seen in public with grown-out highlights and their attendant visible roots is pure nightmare fuel. Yet recently, a handful of fashion-forward personalities are embracing the look. Insiders know this two-tone, dark roots/bleached ends look as “ombre,” and some of the world’s most stylish women are in its thrall.

From subtle grown-out highlights to punkish two-tone ’dos in outre shades of blue and pink, this style certainly isn’t for the fainthearted. But when it’s done well, the effect can be insouciantly fabulous -- not to mention relatively low-maintenance.

Celebrities who’ve rocked the look include Sarah Jessica Parker, whose enviable locks are often darker at the roots; Alexa Chung, whose charmingly tousled choppy bob, with its gradation of colour from dark to light, is as sought-after as her quirky wardrobe; model Erin Wasson, who often proudly shows off dark roots; and actresses Keira Knightley and Rachel Bilson, who both favor subtler versions of the look.

The look tends to work best on natural brunettes, but blondes can also get in on the fun. Stylist and fashion editor Kate Shillingford turned the ombre trend on its head when she was spotted at the Paris ready-to-wear shows sporting a ragged bob that graduated from white blonde to pale blue and finished with black tips. It shouldn’t have worked, but she looked effortlessly chic. Actress Dree Hemingway, meanwhile, had a recent dalliance with blonde and pink ombre that somehow looked both punkish and feminine.

If you’re flirting with the idea of letting your roots grow out and embracing the ombre waif within, read on for our expert tips:

Start Subtly
“Ombre hair can come in various shades, good and bad,” cautions Harry Azidis, a hair stylist from Melbourne’s Oxey and Bushey salon. “It can range from the subtle to the quirky extreme, which has to be executed well and with confidence.” He points to Samantha Harris, Australia’s first aboriginal supermodel, as a great example of how to ease into the look. “She recently sported a subtle version on the cover of Sunday magazine,” he says. “She had a natural dark shade up to mid-cheek, and then fading up one or two shades lighter in pieces toward the ends of her long hair, adding another dimension and texture to her hairstyle.”

Consider Your Lifestyle
As with any avant-garde look, it’s important to take your lifestyle into account when deciding whether or not to commit. If your day job is in a buttoned-up, conservative environment, you may want to reconsider taking the plunge into obvious two-tone, or what Azidis calls “extreme dip coloured hair.” If you’re the experimental type and aren’t married to having long hair, go all out a la Dazed & Confused fashion editor Shillingford -- you can always have the ends cut off when you tire of the look. Azidis says he has seen the look work really well in an Australian context, with “some brilliant wavy beach hair versions for that Bondi sun-bleached halo effect.”

Choose Your Colourist
Colourist Bruna Ballan from Sweet Caroline salon in South Yarra, Melbourne, uses a method of alternating woven foil highlights, teasing the woven wefts and smearing the colour from mid-length to ends to create that faded effect. “It is an effective way of avoiding the nasty obvious regrowth,” comments Azidis, who admires Bruna’s colour work along with the “funky curly version” of the ombre style she sports herself.

Of course, you could achieve a similar look by simply letting your roots grow out, but given that the trick lies in having the colour bleed subtly from roots to tips, it’s best to leave this look to the professionals.

Emma Sloley is a Melbourne-bred writer whose work has appeared in Harper’s BAZAAR, Travel + Leisure and Flare, among other publications. Follow her at Lady Wanderlust. 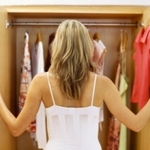 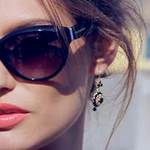 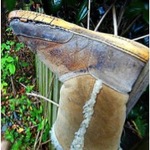 These boots were made for walking...