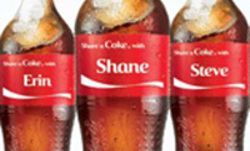 Amanda is the girl people said they most want to „Share a COKE®‟ with when they voted for which names should feature on a new release of 600mL COKE® bottles to share.  Last month, COCA-COLA invited Kiwis to have their say on which names should appear on COKE® bottles next, and more than 30,000 nominations and votes were submitted to decide the final 50 new names.  Amanda received the most votes, with Vanessa, Kayla and Samantha close behind. Michael was the most-voted-for boys name, rounding out the top five.  Who do you want to Share a COKE® with?Amanda may be the girl Kiwis said they most want to ‘Share... read full article