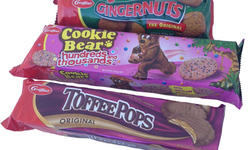 Calling all biscuit lovers… Griffin’s was on a nationwide hunt to find out exactly what New Zealand’s Favourite Griffin’s Bikkie. For the third year running, Griffin’s wanted to find the best bikkie of them all. With delicious family favourites like ToffeePops, Squiggles, Gingernuts, MallowPuffs all in the running – picking a favourite was not easy! Those wanting to support their favourite bikkie visited www.favegriffins.co.nz, or the Griffin’s Facebook page, to cast their vote. James Clark, from Griffin’s, says: “Griffin’s has been baking New Zealand’s favourite biscuits for... read full article