As much as we love our run-of-the-mill match three games, there’s always room in the market for another good action puzzler - especially one that dares to be a little different. Liqua Pop is an innovative wee app from EA and iChromo, combining the addictiveness of match three gameplay with the tactile properties of the iPad.

The object of the game is to match coloured droplets of water, which roll in from the top of the screen, by using a ‘tap and drag’ motion. When two or more droplets of the same colour are matched, they merge to form a larger drop. Once the drop reaches critical mass, a countdown timer is activated, and a few seconds later it will pop. You can expedite this by shaking the iPad (thus getting a good upper body workout at the same time), or delay it while you try and line up a combo, or increase the droplet’s size for even bigger points.

When a drop is destroyed, it nudges a little froggy progress indicator up a reed on the side of the screen, and once he reaches the top you’ll advance to the next level. The first few levels are easy; however added challenge is soon introduced in the form of ladybugs, trapped inside droplets. These can be released by popping droplets, and possess different properties, depending on their colour. For instance, one bug will change adjacent droplets into the same colour, which makes your task of matching them much simpler. Another bug can cause the droplet and its neighbours to explode. Not all of these critters are beneficial, however. Void bugs will create black droplets, which can’t be matched and reduce the amount of screen area, and mono bugs temporarily hide the true colour of droplets onscreen, forcing you to try and remember which was which. This would not be an issue if you had the luxury of time, but you don’t: the game is over once the screen fills up. Fortunately, you can retry a tricky level as many times as you like without having to start over, and you can also go back and replay any level you’ve already beaten. There is a certain amount of strategy involved, but much of the time you’ll just be making matches as quickly as possible, swiping your fingers across the screen and shaking it every few seconds, like a gamer possessed.

The graphics are lush in a ‘tropical rain forest’ sense. Backgrounds are detailed close-ups of foliage; the droplets themselves are transparent, glistening and jewel bright. They behave as liquid should, flowing smoothly around the screen under your fingertip. Ambient sounds have a definite nature theme, with realistic birdsong, water dripping, and the odd rumble of distant thunder. The occasional melodic piano snippet is the only form of music, but the game doesn’t really require anything more. Lovely though it is, this tranquil, Zen-like setting is strangely at odds with the often frenetic action.

”perfect for killing a few minutes here and there”

Liqua Pop is not what we’d call a ‘chill out’ game; however it’s perfect for killing a few minutes here and there, has good replay value, and is suitable for all ages. Just be prepared to work up a sweat… and for some puzzled looks from passersby, if you’re playing it in public! 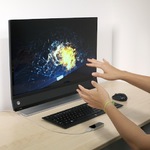 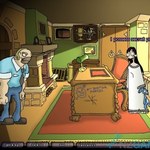 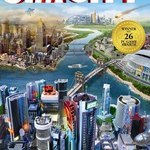