Every so often, you have one of those truly magical occasions where life is perfectly bliss, I had one of those occasions recently. It had a lot to do with Waiheke resort Delamore Lodge and the other half had to do with a helicopter ride, some pretty serious diamonds and a certain question that us girls spend half our lives wanting to hear. Delamore Lodge is something completely out of the box and is where my boy chose to ask this particular girl to marry him.

The engagement itself was spectacular and done in true style – a mystery helicopter ride, a message written in the sand from our view in the sky, the diamond ring of my dreams, a yes from me obviously and then touchdown at Delamore Lodge.

We were greeted by Aaron our host for the evening, who seemed slightly bemused at my bouncy Tigger style attitude mixed with teary eyes and sudden moments of stopping and staring at my left hand (hey, I had just got engaged about two minutes beforehand! It was justified.)

We were given a quick tour of the lodge that Alanis Morrisettehas described as ‘absolutely gorgeous’- library, main kitchen, spa (think Playboy Mansion grotto done sophisticated and hygienically) bags dropped off in our room (oh my goodness the room, more on that later though) before being whisked off to dinner. As we were led down a curving staircase onto a beautifully manicured lawn edged by an infinity pool and topped with views to die for, Aaron casually mentioned that he had seated us down here because ‘we thought you might like to eat with some other people.’

Like hell I want to eat with other people I thought, I just got engaged buddy! These thoughts lasted a mere nanosecond though as we were swept across the lawn and into the private dining room to find my parents and the boy’s parents standing there waiting with champagne at the ready (clearly somebody was rather confident of a yes!) Cue more tears, hugs and much showing off of the ring.

The Wharenui (although it was unlike any Wharenui I’d been in!) is a fabulous private dining getaway with floor to ceiling plate glass windows that allow you take in the full beauty of Owhanake Bay as you enjoy your meal.  The room is also available for meetings, conferences and weddings (hmmm…) We sat down to an extravagant meal that I claimed I wouldn’t eat a bite of as I was too excited. How wrong was I? First up, a magnificent seafood platter with half a crayfish each taking centre stage surrounded by calamari, tuna, snapper, scallops and prawns. We had been warned the portions were generous and they certainly were!

This was followed by a perfectly cooked steak with steamed vegetables and a caramelised onion jus – so simple and so delicious. We finished with a baileys and white chocolate crème brulee and the girl who an hour before was too excited to eat was feeling perfectly full and blissed out.

As our parents were whisked away to catch the last ferry home we went to explore our room.  Delamore Lodge has  four luxury guest suites, ‘Awatea’ (dawn), ‘Motu’ (island), ‘Mahana’ (warm) and ‘Moana’ (ocean) each with more of those views to die for  – from the bed…and the bath…and basically everywhere in your room. No wonder Hilary Swank chose to stay here. Having hosted many famous faces they are well versed in those little touches that take a stay from great, to ‘really special’. From a range of carefully selected CD’s in the CD player, a bath bomb in the bath room to binoculars by the easy chairs for ship spotting on the horizon to two deck chairs hung on the wall outside on your private patio.

Oh, and did I mention the handmade truffles sitting tantalisingly under a glass cake stand? Somehow I managed to find some room for those (yes, all of them) before collapsing into the enormous bed.

Day two, still engaged, still excited! A quick swim in the pool and then breakfast. If I thought dinner was amazing, I was about to be bowled over by breakfast. Now, I am not much of a  fine dining connoisseur, I know a good meal and a good wine but I’m not too crash hot on matching the two of them up. But when it comes to breakfast I am the Simon Gault of the cereals and breakfast at Delamore Lodge should be up there with the best Michelin starred restaurants.

A delicious yoghurt, honey, cinnamon type smoothie. Full cooked breakfast with creamy mushrooms, eggs, bacon, and tomato topped off with another whole plate with fresh yoghurt, fruit compote and fresh fruits. I was in breakfast heaven. For the first time in my life I found myself wishing I was a cow so that I had four stomachs to fill instead of my measly one.

All too soon the stay was over and we were heading to the ferry terminal. As I gazed wistfully back at Delamore Lodge Aaron chose that perfect moment to remind us that we were recently engaged and that apparently, Delamore does one hell of a wedding. 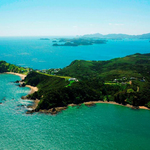 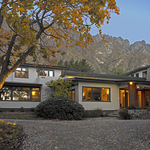 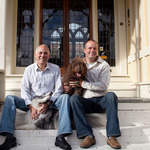