By Kirsten Matthew for The Style Glossy

Heathermary Jackson is on time -- and in a rush. The New York City-based, New Zealand-born stylist has a shoot to prepare for, and time is of the essence.

As a contributing fashion editor at Teen Vogue, Jackson, 38, comes up with eight editorial concepts each season. The rest of her time is spent working for clients like Victoria’s Secret (where she styles A-list models for the company’s infamously sexy catalogues), Salvatore Ferragamo and Tag Heuer.

Dressed in a cashmere sweater, a fur stole, and peg-legged pants, Jackson is chic in a British-country-manor kind of way. She’s also petite, completely makeup-free … and happy to whiz through the story of her stellar career.

How did you get into the world of fashion?
When I was 20, I moved to London to go to the London Academy of Performing Arts. I got into fashion by accident. I did PR for Giorgio Armani. Then, I got a job as an assistant to Charlotte Stockdale (a British stylist who’s worked with Paul Smith and Dolce & Gabbana) for a few years. Then, I went out on my own.

In 1999, you became the fashion editor of The Face, the seminal British music and fashion magazine. What was it like to be on staff there?
No one knew what they were doing, so it gave me a chance to do what I wanted, really. It was fun in that way. I got to do amazing shoots with Larry Clark’s “kids,” with Anna Nicole Smith, Macaulay Culkin. I worked with Kate Moss probably three times. Helena Christiansen was amazing to work with. Even Naomi Campbell was nice to work with.

Tell us about other celebrity shoots.
We shot Anthony Kiedis from the Red Hot Chili Peppers for L’Uomo Vogue. I had a broken foot and was on crutches. Anthony took me for a ride to where we were shooting on the back of his Harley Davidson. It was pretty great. I had some vintage T-shirts for him to wear, and I had one in the pile I was thinking of buying for myself, but they were super-expensive. Anthony picked up the shirt and I told him I was thinking of getting it. He asked me how much it was. At the end of the shoot, he gave me the cash for the T-shirt! So sweet and thoughtful. I still have it.

How would you describe your aesthetic?
I have a boyish take on things. There’s a masculine feeling and a toughness. I was a lot more “street” before. Here in New York City, I’ve become a lot more chic.

How do your stories for Teen Vogue come about?
After you’ve been to the shows, you put in your ideas for shoots. They look at them and tell you which ones they want. A photographer is assigned to the idea, and it starts. We discuss the idea, location, dates. Then, I spend two or three days at the office putting outfits together. There’s a big, huge room of clothes to go through. Then you do the shoot.

Are you a big shopper?
I don’t shop. I had to go to Barney’s recently for a job and I saw a few things I liked, but I never go shopping. Doing this job put me off it. Usually, at the shows I make a note of what I like and I order it. I don’t try things on. The only shop I ever go to is Celine. Ever since Phoebe Philo (the designer) took it over, it’s my first stop when I arrive in Paris. But otherwise, I have a uniform. I get hooked on one thing and wear the same thing every day.

Kirsten Matthew is a New Zealand writer based in New York City. She has written for InStyle.com and The New York Times. 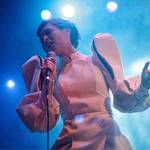 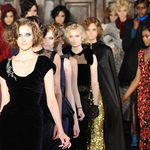 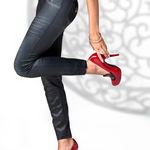