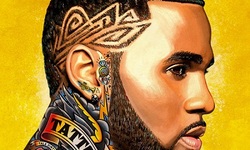 Singer, songwriter and performer Jason Derulo has released his third album, TATTOOS. ‘The Other Side’, the first single from the album was released earlier this year and has been Derulo’s most successful single to date.  Derulo’s second single ‘Talk Dirty’ featuring 2 Chainz was released last week. "It's just a shocking song,” says Jason.  “When you hear it, you'll know what I'm talking about.  It's very out there, but it was so fun."  TATTOOS celebrates Jason’s triumphant return to music after a catastrophic neck injury while rehearsing for a world tour in... read full article