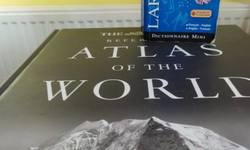 Language and oxygen. We’re consumed by both from our time of arrival until we shuffle off again. – Take either away and you suddenly realise how difficult life can become.  Earlier in the year we did just that. Driving along lane 126 at the Dover ferry terminal, we left the familiar sounds of our native language and boarded a ferry bound for France. English was now behind us. And just like a diver reliant on their oxygen regulator for survival, we too, produced the language equivalent of  a scuba tank – The Lonely Planet’s Phrase Book to France. Initially, new language is like an unbroken chain of crescendo-decrescendo... read full article