Discussing :: The Heat
« back to Forums Index / Article Discussions / The Heat 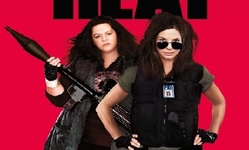 With a great deal of talent both in front of and behind the camera,The Heat seemed like a can’t miss comedy. The last time director Paul Feig helmed a theatrical comedy, the result was 2011′s surprise hit Bridesmaids, which turned Melissa McCarthy into a star. Reteaming with McCarthy for an R-rated buddy cop actioner, Feig falls short of recapturing the magic of Bridesmaids, with the screenplay providing very little substance for the predominantly able cast to work with. In spite of all that it had going for it, The Heat is an oddly flaccid comedy, providing very few worthwhile scenes in what’s otherwise an... read full article