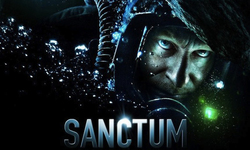 If done right, a “man versus nature” disaster picture can effectively get the pulse pounding. Couple the sheer implacability of the antagonist with the difficulties of survival and a situation that’s direr than that of a traditional thriller, and the result is usually an involving feature. 2011’s Sanctum is a serviceable instance of an effective disaster movie in which the nail-biting set-pieces and technical competency outweighs the clumsy scripting and wooden acting. For the advertising campaign, James Cameron’s name has been touted a lot despite merely serving as an executive producer. Though he’s the... read full article