Some cities are synonymous with a musical movement. Seattle and grunge are about as inseparable as Cobain and angst. Country music would hardly exist without Nashville, or at least it would be a hell of a lot less profitable. And some would argue that rap music came ‘straight outta Compton’ (see what I did there?). Who would have thought that New Zealand's Southern tartan-spangled township of about 120,000 would spawn a school of musicians that would become some of the most influential independent artists of the ‘70s. Dunedin has produced some of New Zealand's most exciting and unique artists, and the Dunedin Sound has become its own celebrated genre.

Fast forward 40-odd years and we find that the Dunedin Sound is still as strong as ever. While there has been a slight shift away from the grungy ethos of their forefathers, Dunedin’s premier musicians still have a certain je ne sais quoi that makes them stand out from the rest of the country, and, the world. It has been far too long since a list of purveyors of the Dunedin Sound has been published. And so (in light of the world’s recent fanaticism with Superhero Supergroups), like the great Nicholas L. Fury, I bellow from the rooftops, in my deepest and saltiest voice, for the 2012 Dunedin Music Scene to "ASSEMBLE!"

(No, my Avengers reference has nothing really to do with Dunedin, but... whatever) 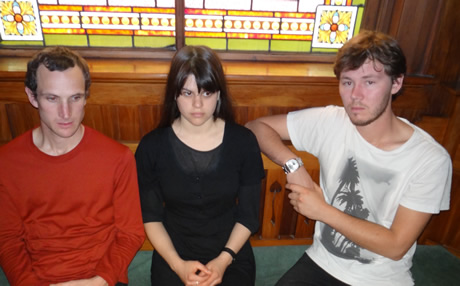 Achievements: Having Marc Riley play us on BBC6. Having Stephen Pastel write us fan mail. Playing in Riverton with The Puddle, where it was snowing horizontally at sea level.

On the horizon: Playing at venues all over the country in July, finishing new album.

Who would win in a fight between Samuel L. Jackson and Optimus Prime? I'm not sure. Maybe it'd be a stalemate…

Years active: Lightning Bells is barely a year old but we've all known each other and played together for a while.

Achievements: Getting the video for our first single "Pockets Full Of Gold" playing on C4. Starting our own record label, and getting our first official noise control warning.

Influences: With a band of six our musical influences run far and wide - Phil's car only gets Mai FM so that might come through at some stage...

On the horizon: We're playing a couple of gigs in Auckland soon and plan on getting back into the studio in the coming months.

3 things you absolutely couldn't live without? Our mates that never fail to turn up to our gigs, the sound proofing in the basement where we practice, and the old family piano. 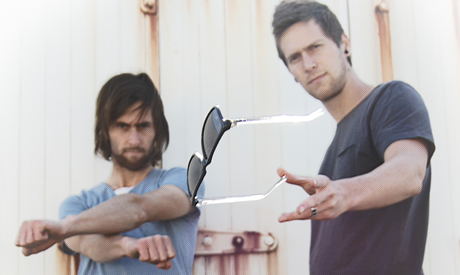 Achievements: Headlining the Regent Theatre and playing to a crowd of over 600. Changing from a 4-piece band to a duo and living to tell the tale. Touring around NZ.

On the horizon: Embarking on a winter tour throughout all of May and June. Recording a new single called "Let's Run Away." Organizing nationwide tour for December.

Favourite albums of 2012 so far? Ed Sheeran - +. Foster The People - Torches. Foo Fighters - Wasting Light. (Editor's note: I just want to make it clear that none of these albums were released in 2012…)

3 things you absolutely couldn't live without?

If you could make a phone call to your 10-year-old self, what would you tell them and why?

Hamish: When you turn 16 be nicer to your parents.

Tom: When you're about to stop music practice, just go for 5 minutes longer. 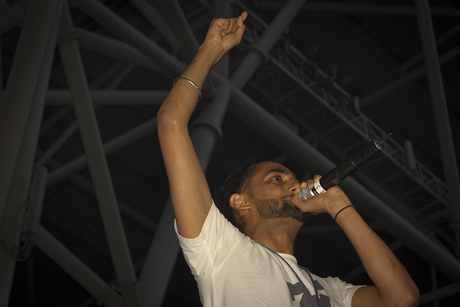 Years active: Performing and playing music for well over a decade - DJ-ing and producing intensively for the last 6 years.

Achievements: OUSA 'Future DJ' winner in 2010. Shapeshifter national remix competition winner in 2011. Headlining every OUSA Toga Party for the past 3 years. Opening for a plethora of international superstars including Nero, Dizzee Rascal and Flux Pavillion.

On the horizon: Releasing of a collection of Six60 remixes, recording second EP and touring the summer festival circuit.

Would you do crack with Nicholas Cage? Obviously if he was buying... 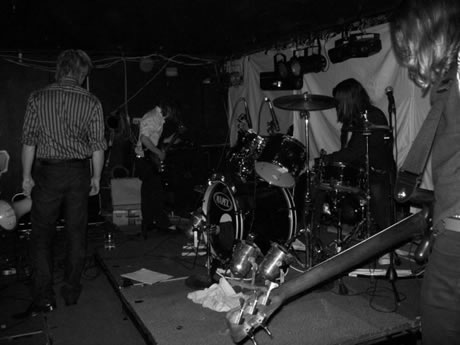 Years active: Started in 2009 as a classic four-piece, before adding Ben on saxophone in 2012.

Self-description: "A frightening collage of The Melvins, the cleansing self-hatred of Tom Waits, and Nick Cave. Basically, Beer Rock."

On the horizon: Currently working on new EP…

Favourite albums of 2012 so far? Alizarin Lizard - The Weekend Went Without You. Left Or Right - Buzzy. Osmium - The Misery Harvest.

3 things you absolutely couldn't live without? Warm socks, Modaks chippies, Facebook likes, 27 bucks. (Editor's note: I realize this is 4 items but I made an exception as having '27 bucks' is a basic human necessity…)

Who’s your favourite Avenger? Definitely Ant-Man… He’s a great team player, can carry 8x his weight. And he shrinks down to the size of an ant. Useful stuff unless your foe is a colony of ants. 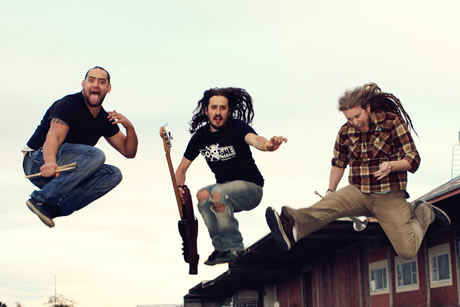 Years active: Performed together since 1997. Active as Left or Right for 6 years

Self-description: "A buzzy mash-up of genres resulting in a musical journey and mind fuck."

Influences: Artists that leave everything on stage when they perform… Legendary bands of the 60s & 70s in particular.

On the horizon: Currently on Buzzy NZ Album release tour. Dunedin release party at Sammy's on the 2nd of June… Then touring Australia later this year.

Favourite albums of 2012 so far? Alizarin Lizard - The Weekend Went Without You. Osmium - The Misery Harvest. 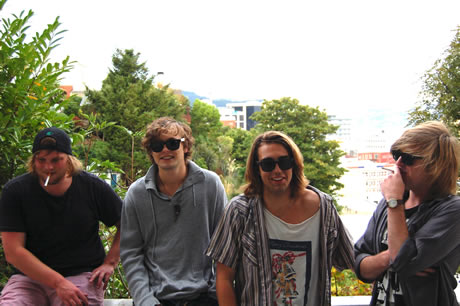 Years active: Shaun, Dave, and Connor met during their first year of uni in 2010 - Ross joined up last year.

Key Releases: Half a Step Up EP - released earlier this year.

Achievements: Getting on TV3 for playing at Hyde St, finishing EP, playing at EarthTonz Festival.

Self-description: "A blend of jazz, hard rock, alternative and folk… We like to call it, Modern Rock n’ Roll."

Favorite albums of 2012 so far? Jack White - Blunderbuss. Foxy Shazam - The Church of Rock and Roll. The Shins - Port of Morrow.

Would you rather strangle-to-death a terminally-ill baby, or an extremely healthy 80-year-old? Is both an option? 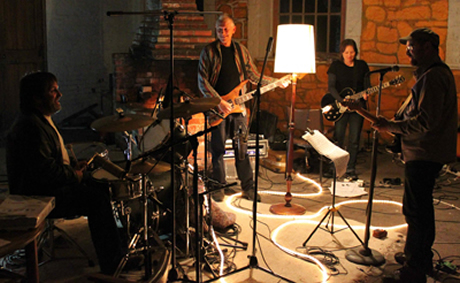 Years active: Since the early '80s.

Achievements: Supporting Radiohead for 15 shows across the USA, playing in Berlin before the wall came down, playing in the outer islands of Scotland and Norway. (Editor’s note: I'd just like to say that this is pretty fucking impressive)

On the horizon: Working on solo album and new Bats album, organizing releases of Electric Blood albums through a US label.

If you could have lived through any era, which would you choose and why? The 70's in Germany, so I could have seen Neu, Cluster and Can. 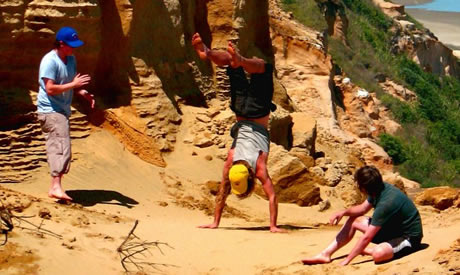 Achievements: Completing 2 massive tours of NZ, getting funding from NZ on Air, not being pulled over by the police at any point of any tour, having an onstage 3-way jam with An Emerald City and The Checks.

Self-description: "Like a Monkey being baptised in a lake of banana, cookies and cream real fruit ice cream…”

On the horizon: Playing at Left or Right's Buzzy album release show at Sammy's on 2nd of June. Writing and recording new material in the next few months.

Favourite albums of 2012 so far? Tono and the Finance Company - Up Here For Dancing. Beach Pigs - Beach Pigs. Left or Right - Buzzy

Would you rather have dinner with Joseph Kony or Barack Obama? Obama - 'cos he knows Jay-Z, who knows Beyonce, who knows Austin Powers, who knows Garth from Wayne's World. 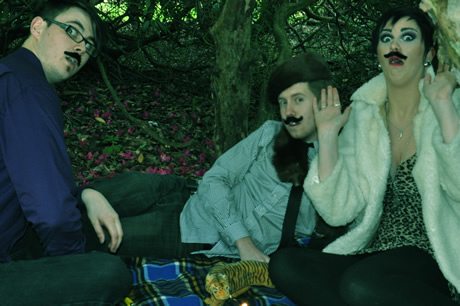 Influences: We once spent 5 hours of a drunken evening loudly debating what musical influences we share. The evening ended with a broken banjo-string, a toilet full of vomit and 3 sore heads. Needless to say we couldn’t find common ground.

On the horizon: Intensive writing for new album

Favourite albums of 2012 so far? Maps & Atlases - Beware and Be Grateful. Tono and the Finance Company – Up Here For Dancing. Death Grips – The Money Store.

3 things you absolutely couldn't live without? Antibiotics, Mums, and Dads.

Who would win in a fight between Samuel L. Jackson and Jesus? It’s hard to fight your imagination. (Editor's note: I take this to mean that Mr. Jackson would reign supreme) 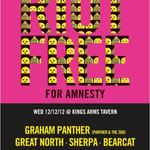 Get Your Riot Face On for Amnesty International 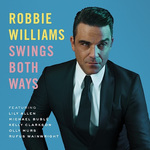 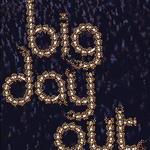