It’s difficult to muster up much enthusiasm about 2013′s Saving Santa, a completely forgettable Christmas-themed animation which lacks the resources and ingenuity to become an instant classic. Written by stand-up comedian Ricky Roxburgh, it’s essentially a hodgepodge of ideas from other well-known holiday movies such as Elf, The Santa Clause and Arthur Christmas, with some Back to the Future thrown in for good measure. It flaunts an impressive voice cast, to be sure, but this is a low-budget feature which went straight-to-video in most major territories, although it received a minor theatrical release in the UK. It’s perhaps colourful and brisk enough to hold the attention spans of young kids, but that’s simply not good enough, especially with movies like Rise of the Guardians already available in the overcrowded marketplace. 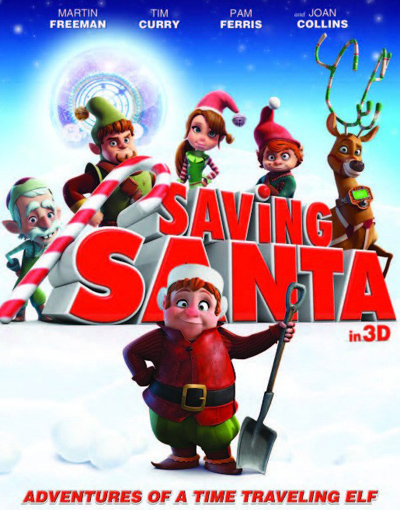 A lowly stable elf, Bernard (Martin Freeman) aspires to someday join the elf elite and become one of Santa’s inventors. Attending a meeting with the board hoping to impress them with his newest gadget, Bernard’s invention malfunctions, leading to a power blackout across the North Pole. On top of being a mortally embarrassing moment, Bernard’s muck-up unexpectedly exposes Santa’s secret location to the world. Unfortunately, the wicked Neville Baddington (Tim Curry) has been on the prowl for such an opportunity for years, and grasps the chance to invade the North Pole. Baddington is head of the Quickest Delivery Service, and hopes to steal the secrets of Santa’s sleigh in order to render his empire unstoppable. As Baddington descends upon the North Pole with his soldiers, Bernard takes it upon himself to save the day, using Santa’s time-travel globe in a bid to prevent catastrophe.

The premise for Saving Santa would be better suited for an hour-long television special, especially since the picture was produced on a low-budget and went straight to disc in most countries anyway. As an 80-minute motion picture, it does not quite work, as Roxburgh’s screenplay lacks the wit to justify its length. The zero-to-hero narrative is much too overused by now, and there’s not enough creativity to overcome the story’s blatant familiarity and predictability. Worse, the movie does not take enough time to flesh out the lead protagonist, rendering him one-dimensional and generic. But perhaps the biggest issue with Saving Santa is that it becomes too convoluted for its own good. Any story involving time-travel is going to be convoluted to some extent, but it’s really leaden here, and the myriad of plot complications fail to add up to an engaging experience.

Saving Santa was reportedly produced for about $7.5 million, a scant sum for this type of picture, and the tiny budget is obvious in the visuals. Compared to the lush extravagance of DreamWorks and Pixar productions, the animation here is basic at best, without the polish, dynamicity or fine detail that we would expect from a 2013 release. Admittedly, it is colourful, and there are some nice musical numbers scattered throughout the narrative of varying quality, but the screenplay isn’t strong enough to compensate for the mediocre visual presentation. It would seem that a great deal of the budget was blown on the cast, who are surprisingly high calibre for a movie like this. Martin Freeman is amiable enough as the well-meaning Bernard, but the most memorable performer is Tim Curry, who’s delightfully over-the-top and hammy as the film’s villain. Also present is Joan Collins, who’s unfortunately given practically nothing to do, while Noel Clarke and Ashley Tisdale are wasted on bland, single-note roles. But perhaps the most disappointing missed opportunity is Chris Barrie as Blitzen. One of Bernard’s inventions allows Blitzen to speak, but not in English, leaving Barrie to say a handful of lines in a foreign language. It’s a terrible idea in execution, as it forbids potentially amusing back-and-forth between Freeman and Barrie. If you’re going to use Barrie, use him properly!

Although Bernard dreams of big things and is ultimately able to achieve his dreams, Saving Santa wants to be a holiday mainstay but is destined to be forgotten. The broad strokes are okay, but the execution is slipshod, with leaden storytelling and witless scripting exacerbating the unremarkable visuals. Much like a Christmas present that you quickly get bored with and never touch again, Saving Santa will quickly fade from your memory. 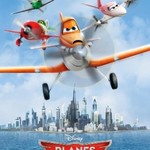 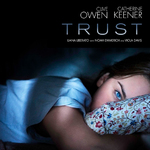 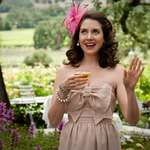